UNITED NATIONS: Moving away from the death penalty – Lessons from National experience 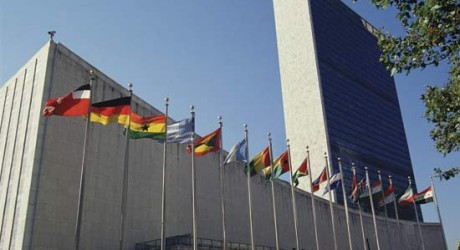 The International Commission against the Death Penalty (ICDP) was invited by the United Nations to participate in a panel discussion on “Moving away from the death penalty – Lessons from national experiences “.

The event, to which all UN Member States were invited, took take place at UN headquarters in New York on 3rd July 2012. Mr Federico Mayor, President of the ICDP, represented the ICDP at the meeting.

The event, organized by the UN Office of the High Commissioner for Human Rights, was an opportunity to inform Member States about the death penalty in advance of the UN General Assembly’s debate on a moratorium on the use of the death penalty later this year.

The meeting was opened by the UN Secretary-General Ban Ki-moon. In his opening remarks he called on Member States which use the death penalty to abolish the practice, stressing that the right to life lies at the heart of international human rights law.

In his address he also spoke about juvenile offenders and the fact that 32 states retain the death penalty for drug offences, and stated that the UN will not establish or directly participate in any tribunal that allows for capital punishment. He concluded by saying that “The call by the General Assembly for a global moratorium is a crucial stepping stone in the natural progression towards a full worldwide abolition of the death penalty.”

The event was divided in two sessions: first one for Member States and second one for NGOs.
Mr Mayor was asked to participate in the first panel among delegates from Guatemala (Blanca Aida Stalling Davila, Director-General of El Instituto de la Defensa Publica Penal of Guatemala) and Burundi (Mr. Valentin Bagorikunda, Prosecutor-General of the Republic of Burundi) as well as the Co- Director of the NGO “Innocence project” in the USA Mr Barry Scheck.

The panel was chaired by the Assistant Secretary-General Ivan Šimonović. Mr Mayor’s intervention included a global perspective on capital punishment with examples of countries that have taken steps to move towards the abolition of the death penalty. He highlighted in particular the role of the IGOs and NGOs in this process. The UN High Commissioner for Human Rights Madame Pillay closed the session.

For further information on the event and the debate, please visit:
http://www.ohchr.org/EN/NewYork/Stories/Pages/Callsforendtodeathpenalty.aspx

The discussions of the panel were included in the publication entitled “Moving away from the death penalty. Lessons from national experiences” by the Office of the High Commissioner for Human Rights. Please visit the publication here.

You can allow, block or delete cookies by configuring the options of your Internet browser. In case you do not allow the installation of cookies in your browser, you may not be able to access some of the services on our website.
In the following links you have at your disposal all the information to configure or disable cookies in each browser:
• Google Chrome
• Mozilla Firefox
• Internet Explorer
• Safari
• Safari para IOS (iPhone y iPad)
• Chrome para Android

Necessary Always Enabled
Necessary cookies are absolutely essential for the website to function properly. This category only includes cookies that ensures basic functionalities and security features of the website. These cookies do not store any personal information.
Non-necessary
Any cookies that may not be particularly necessary for the website to function and is used specifically to collect user personal data via analytics, ads, other embedded contents are termed as non-necessary cookies. It is mandatory to procure user consent prior to running these cookies on your website.
SAVE & ACCEPT