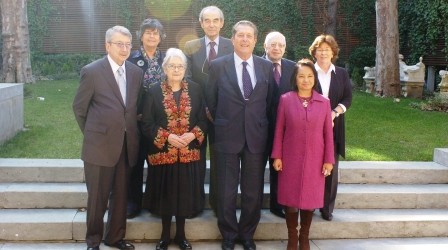 On 3-4 February 2011, the International Commission against the Death Penalty (ICDP) met for the second time in Madrid in order to debate on efficient short-, mid- and long-term strategies to promote the universal abolition of capital punishment.

The different backgrounds of the members of the ICDP provided for rich and fruitful debates. During these two days, the ICDP analyzed the situation of the death penalty in Africa, the Middle East and Asia. Special attention was given to the situation in Africa, where the existence of regional organs such as the African Commission on Human and Peoples’ Rights (ACHPR) and the Working Group on Death Penalty of the ACHPR constitute a favourable condition to take the process of abolition further. In addition, the attendees also determined strategies for a number of African countries. With regard to Asia and the Middle East, the ICDP decided to opt for a country-by-country approach and adopted short-, mid- or long-term strategies according to the particularities of the several country situations. In addition, the Commissioners also raised some thematical issues such as the situation of juvenile offenders in certain countries or the discriminatory imposition of capital punishment on minorities.

The President of the ICDP, Federico Mayor Zaragoza, furthermore informed about possible general activities for the future, i. a. the participation at a seminar on the situation of the death penalty in the Caribbean (Cartagena de Indias, 3-5 June 2011). He also announced that during the next meeting of the ICDP in June, the discussions will focus on the situation in the Americas and on the pivotal role International and Regional Organizations have in order to bring an end to the use of the death penalty.

During the afternoon of the second day, the Commissioners met with several representatives of NGOs working in this area. The encounter offered a good opportunity to coordinate the activities of the different actors and the ICDP so as to heighten the impact of the numerous efforts of local, regional and global scale.

Please click here for the press release which has been widely distributed among the world press and relevant actors.