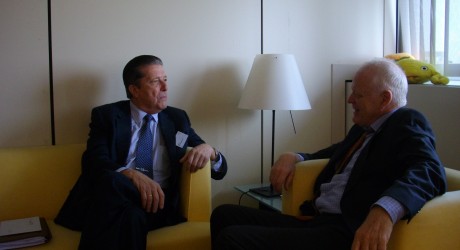 On 14 April 2011, the President of the International Commission against the Death Penalty, Federico Mayor, gave a speech as a keynote speaker during the spring session of the Parliamentary Assembly of the Council of Europe.

The President of the International Commission also met with the Commissioner for Human Rights Mr. Thomas Hammarberg and the President of the Parliamentary Assembly Mr Mevlut Cavusoglu.  The objectives of the meeting were to inform on the work that has been carried out by the ICDP since its establishment in Madrid in October 2010 and, secondly to establish future cooperation on the issue of the abolition of the death penalty.

Read here the Statement by the President of the ICDP, Federico Mayor delivered at the Parliamentary Assembly Session on 14 April 2011.