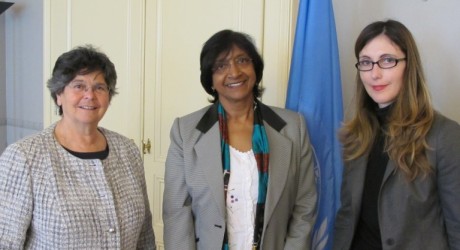 On 24 March 2011, Ruth Dreifuss, Member of the ICDP and former President of Switzerland, accompanied by the Secretary-General of the ICDP Asunta Vivó, met with the UN High Commissioner for Human Rights Navanethem Pillay at the Palais Wilson in Geneva.

The objectives of the meeting were to inform the High Commissioner on the work that has been carried out by the ICDP since its establishment in Madrid in October 2010 and, secondly, to strengthen the cooperation with the OHCHR. With regard to the latter, both parties highlighted the importance of joining efforts to promote the abolition of the death penalty in all regions in the world.