4th Meeting of the ICDP: First Anniversary and Permanent Installation in Geneva 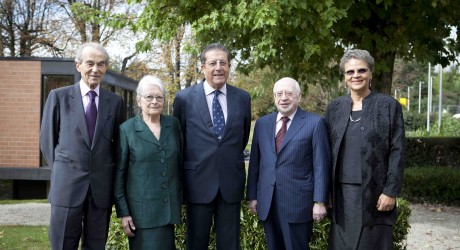 On 10 and 11 October, the International Commission against the Death Penalty (ICPD) met in Geneva in order to discuss strategies to strengthen the abolitionist trends in different regions of the world.

After one year in Madrid, the ICDP will now be permanently installed in Geneva, city of human rights and home to a myriad of International Organizations and Non-Governmental Organizations. It is located in the Academy of International Humanitarian Law and Human Rights. In a special public event, the ICDP was warmly welcomed to Geneva by Micheline Calmy-Rey, President of the Swiss Confederation, as well as by the authorities of the city and the canton of Geneva.

The move to Geneva also marks the first anniversary of the ICDP and coincides with the World Day against the Death Penalty. In this context, the President Federico Mayor and Ruth Dreifuss held a press conference in order to present the Commission and its work.

During the meeting, particular attention was devoted to the African continent, China and the issue of the death penalty for drug-related offences. The situation in Africa was presented by Sylvie Kayitesi, Chair of the Working Group on the Death Penalty of the African Commission on Human and Peoples Rights. Furthermore, Emeritus Oxford Professor Roger Hood and Patrick Gallue of the London-based International Harm Reduction Association provided the members of the ICDP with valuable inputs on the situation of the death penalty in China and on issue of the death penalty for drug-related offences. In the context of its forth meeting, the ICDP also met with the UN High Commissioner for Human Rights, Navanethem Pillay.

The two days meeting of the ICDP ended with a film-debate: The screening of “Give Up Tomorrow”, a documental about the case of Paco Larrañaga, a Philippine-Spanish citizen who was sentenced to death in the Phillipines; and the subsequent debate on the movie with Ruth Dreifuss, Ioanna Kuçurdi and the filmmakers.

Click here in order to read the press release.