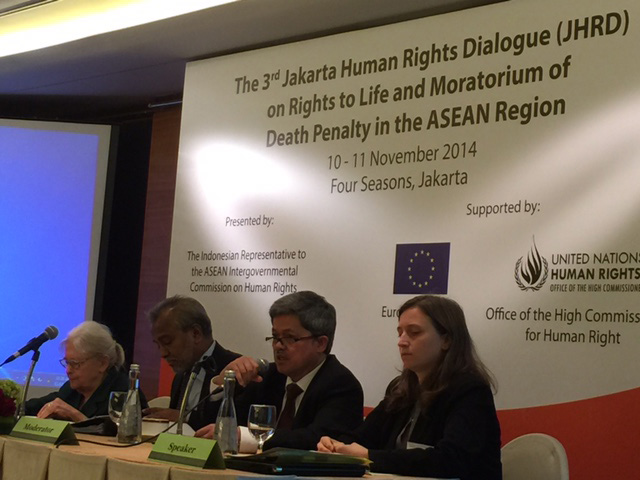 ICDP Commissioner Ioanna Kucuradi participated at the 3rd Jakarta Human Rights Dialogue on Rights to Life and Moratorium of Death Penalty in the ASEAN Region (JHRD) on 10 and 11 November 2014 in Jakarta, Indonesia.

The JHRD was organised by the European Union (EU) and the UN’s Office of the High Commissioner for Human Rights (OHCHR) and hosted by the Indonesia’s Representative to the ASEAN Intergovernmental Commission for Human Rights (AICHR). The two-day event had speakers including the EU Special Representative for Human Rights Stavros Lambrinidis, UN Special Rapporteur on Extrajudicial, Summary or Arbitrary Executions Christof Heyns and several human rights experts representing the OHCHR, international and national organisations including many from the ASEAN region.

Moreover, ICDP Commissioner Ioanna Kucuradi met with Director General for Multilateral Affairs of the Ministry of Foreign Affairs of the Republic of Indonesia Ambassador Hasan Kleib on 11 November to discuss issues related to the death penalty in the country.